Ange's Got Moxie
Are you a strong person who refuses to give up or give in? Are you a patient or caregiver? I've been and still am, both. This blog is all about my journey. I also love life in the country and love to laugh and try to see things with humor.

Happy Birthday or Anniversary . . to Me! 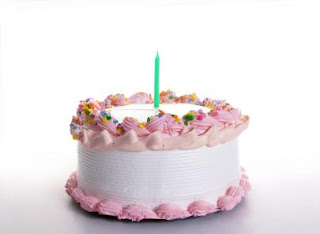 It's been a year now since I had my colectomy, a whole year.  On March 5th of last year, I had an appointment at the hospital to get registered, have labs, do all the paperwork, talk to 5,000 people and be completely inspected and meet with a new friend, my stoma nurse.  She looked at my belly while I was sitting, standing, leaning, bending and every way possible and drew possible site for my stoma.  I was exhausted when I left the hospital.

Even though eating was causing me great pain, and I'd been having diarrhea for months after just a scrambled egg, I'd still had to take laxatives for a couple days in the evening before this appointment.  I was terrified that I would need to run for a bathroom.  I can't remember exactly what I had eaten the night before but I think it was a pudding cup.  Pudding cups and cottage cheese that I had been putting in the blender were about all I had been eating besides the eggs for about a month.  When I left the appointment, I had some tea.  Liquids only for that day.

I also discovered one of the biggest lies in the world that day.  Liquid magnesium citrate with a label that says "pleasing lemony flavor".  Biggest lie ever!  You see, my diarrhea, not eating and laxatives were not enough.  I was having my colon removed.  We had to be absolutely sure there was nothing left in it.  Lemony magnesium citrate first makes your mouth pucker until cheeks hit your teeth, then your eyes start to water and then it begins to take the hide off of your tongue.  It has enough malic acid to peel paint or clean toilet bowls.  Thankfully, I had some agava syrup in my cabinet and since it was a clear liquid and I doctored my pleasing lemony flavored magnesium citrate until was actually palatable.  Between trying to swallow it all and running to the bathroom I think I was up all night long.  I didn't care.  I was so anxious for March 5th to be over and March 6th to arrive.  Finally it did.

I should have been nervous.  I should have been scared.  This was a big operation.  The nurse told me a sedative had been ordered for me if I needed it before going in to surgery.  She saw me smiling and said that I didn't need it.  My family might have needed it.  All I could think of was that I was so ready to take this step and get healthy again.  When you see me smiling in the pre-op picture, except for being so thin, you probably wouldn't know how sick I really was because I was so relaxed and finally feeling hopefully.  And wow, was I sick.  In those first few days after surgery, it really showed.  I couldn't hide how thin I was in a hospital gown.  The surgeon told my family how malnourished and dehydrated I'd really been.  My veins were blowing and it took a while for my small intestine to start working again.  But I kept pushing.  I got up the day of surgery and I have another picture that same day.

And now, it's a year.  Some days, it's seem like yesterday.  Some days, it seems like forever.  I can eat!  I've gained weight.  There are times I completely forget that I even have a stoma and bag.  There are days that it's all I think about.  I will never be the same but who is ever the same as they were a year ago?  I am healthier.  I am more "normal" now than I was a year ago.  So Happy Birthday Moxie.  I'm glad that I have you.
Posted by Unknown at 9:34 PM

So Why This Blog Anyway?

Life can get very stressful when you are caregiver or a patient. I am both. Blogging is a way for me to relieve some of that stress and find humor in every situation. When dealing with the most stressful of situations, my family always laughed growing up. Laughing in a hospital doesn't mean you are not taking the situation seriously, or not listening and understanding when you need to do so. It means you are lightening the mood, releasing some tension and stress and getting things out. That's what I am trying to do here. Everything won't be funny, life just isn't. But I am also trying to find and inject as much humor in my situation as possible.